So, Grace just did the cutest thing ever. Again. And again. And again. Wait, did I become one of those moms who's enamored with everything her child does? (Disclaimer: There are a number of not-so-cute things about Gracie. In fact, some of these are so prevalent they've led to nicknames: "What's up, ear infection baby? or "How's it going dia 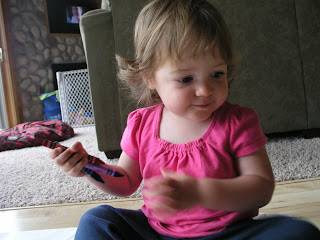 per rashy butt?" or "Hi there buggery nose." OK, now that's out of the way, on with the cuteness.)

Some other cuteness which you may (or may not) appreciate ...

British (yeah) baby: Grace often sounds like she's British and it cracks me up. When we put her shorts on she says "shoats" -- so cute. Um, maybe you have to be there.

Hearty laugh: When she's being tickled or is particularly amused she has this really authentic laugh. Definitely not a girly "tee-hee-hee."

Assume the tickle position: If Grace wants to be tickled she'll lay flat on the floor and wait for someone to tickle her. If we don't take the hint she'll tickle herself and say "didle, tidle, didle." The pug often wanders over and looks at the kid like she's crazy.

Dancing machine: Lately we've been dancing around the house a lot. While Grace likes lots of different songs (some of which aren't even children's songs, yea!), lately she's preferred some of the classics. We stay with the basic steps for our acoustic version of Ring Around the Rosie, but she pulls out some freestyle moves to a CD version of the Hokey Pokey. Some of them look somewhat similar to dancing I did on speakers at bars in college. Yipes.

Weeeee?: No, this isn't about peeing, it's how Grace requests to slide down my legs or be tossed in the air by Jay. She'll walk up to us and ask, "Weeeee?"

Melmo: We let Grace watch 10 or so minutes of Elmo's World a few days a week. This has led her to believe that Elmo (or Melmo, as Grace says) lives in the TV. Every TV. I have to say I rather enjoy the show, I'm sure that will change once I see Mr. Noodle be goofy for the umpteenth time. That said, I think I'll always giggle when Elmo asks a baby something.

Shooos: This girl loves footwear. Grace could play and play and play with shoes -- especially mine. I have to say, this obsession with shoes likely comes from me. Many of you who know me, might question that, but it's a repressed obsession (due to the fact that I'm a thrifty person). We went to the mall this weekend with "Auntie" Kim and walked over to the clearance shoe racks. Grace was almost vibrating with excitement at the display of such an array of shooos. By the way, she also likes bags -- handbags, backpacks, purses, you name it. Again, my fault : )

Busy, busy: Just watching her go-go-go is entertaining. She's constantly busy with one thing or another. As you can see in the photo, her hands are always in motion. And the same is very true for her legs. She tries to get to places so fast that she falls over. Thus, we've signed a plethora of injury reports at her day care. Despite our hopes that her name would bestow coordination and balance upon her, Grace seems destined to follow in her parents' (stumbling) footsteps.
Posted by Kate at 3:48 PM

Oh my gosh, we had a "Melmo" kid too! That was what Caleb called him. And Eli is also obsessed. We have an Elmo sprinkler in the back yard and every time he sees it he goes absolutely wild with excitement. Turning it on is another story...that is evidently pure hell for the kids.

good evening bros. I'm actually into shoes and I was looking for the sake of that singular model. The prices seeking the velcros are about 230 bucks on every page. But finally I bring about this area selling them for half price. I really love those [url=http://www.shoesempire.com]prada sneakers[/url]. I will definetly purchase those. what can you tell me about these?

hello everyone. I'm actually into shoes and I had been looking allowing for regarding that exact brand. The prices for the shoes are approximately 220 pounds everwhere. But definitively I set this site selling them for the benefit of half price. I really love those [url=http://www.shoesempire.com]gucci sneakers[/url]. I will absolutely order them. what can you say about it?

hi there friends. I'm honestly into shoes and I have been looking allowing for regarding that exact model. The prices due to the fact that the boots were approximately 170 pounds on every page. But for all I set this locate selling them for half price. I really like those [url=http://www.shoesempire.com]gucci sneakers[/url]. I will probably purchase those. what is your opinion?