The Good, the Bad and the Funny

As all parents know, there are definite ups and downs in parenting, and sometimes the boundaries between/amongst these highs and lows are blurred.

The Good/Bad:
No more ear infections for Grace! That's the good. We got ear tubes for Gracie and we had been told how great it would be. But that night and the 10 or so days after weren't so great. Grace would not go down to sleep without a fight, a screaming, shrieking fight. In fact I was going to write a blog post right around that time but thought better of it. To get a sense of the how we were doing, here is what I jotted down … "Usually our blogs are cute and clever … I just don't have the energy -- mentally or physically -- to be cute or clever right now. Actually the lack of sleep doesn't bother me. It's the lack of being able to figure out what's wrong.”

While the tubes were ultimately a good thing, the timing might not have been the best. Grace had just gone through a big week of newness, as often happens in the life of a toddler. She had just transfered to a new room at day care, she attened her first Minnesota State Fair and had gone through her first (and hopefully, only) surgery. All that on top of exponential learn 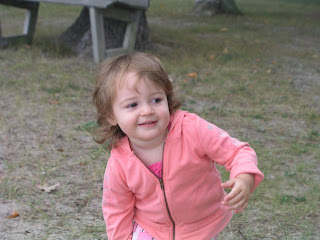 ing and development and making of connections. Some of those connections might have been part of the sleeping problem, and thus, part of our sleeping solution. Grace had made friends with all of her stuffed animals (all of which she called “babies”). Her room was pretty well stocked with these babies and at night she’d often stand in her crib and sob, saying, “babies, babies, babies.” One night we decided to remove these distractions and that happened to be the night when we got our good sleeper back. This was just in time for her first trip to Grandma and Grandpa Gorman’s cabin. As you can see in the photo she was always in motion. Days filled with playing in the sand on the beach and watching a friendly squirrel made for an exhausted Gracie -- not to mention a well rested mommy and daddy too.

The Funny:
So, the more words Grace can say, the funnier she gets. And sometimes what she says isn’t as funny as how she says it –- we’ll that and the fact that Jay and I hear Gracie's funniness in ways many others might not. For example, Grace is finally saying “Mama.” When she says it, it is often in that tone that sounds similar to part of Queen’s Bohemian Rhapsody, you know where it talks about killing a man and how life has just begun … OoooOoooO. So sometimes an exclamation of "Mama!" can start off a Edenborg household mini-karaoke session.

Another word she says a lot, a lot is “colors.” She’s got a book she can color in and a magnetic board that she “colors” on. So she’ll often walk around repeatedly requesting to partake in the activity by exclaiming “colors.” So it happens that there is an rap song called Colors, where part of the background is the rapper saying “Colors” in a repetitious manner. So sometimes this leads to a bit of an Edenborg freestyle rap session. Such amazing creativity that Grace inspires!

Now, I’m not comparing our daughter is Freddie Mercury or Ice T, but she sometimes demonstrates a vocal range (at least the high-pitched notes) of the former and the beat-box ability (accompanied by some spittle) of the latter.

So, these days we're back to normal, albeit a new normal. But who knows, by tomorrow I might be singing a new tune.
Posted by Kate at 8:57 AM

Thanks for keeping the blog going, this is the only way I get to see Gracie. She is becoming a pretty little girl. She still has those "I'm going to get in trouble" eyes. Hope everything is going ok for you and the rest of the family. Take care. d