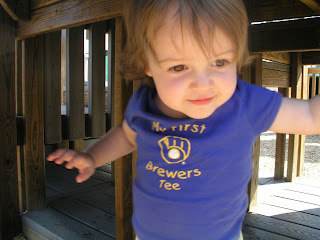 When Grace started tossing a ball down our hallway, I started wondering what type of sports she might get into. She's got quite a good throwing arm, better than her mom (although that's not saying much). A few months ago I purchased a little plastic bat at a garage sale, perhaps against my better judgment. Anything with a bat and ball is very much outside of my realm of expertise or interest. (I am scarred by my co-ed softball experiences in high school phy.ed. class. Let's just say it wasn't fun.)

Of course, Jay likes sports -- both playing and watching. And I mostly don't mind sports -- sometimes playing, sometimes watching. Jay's always been play something, usually softball or volleyball, every since we met. He's even done a bit of soccer and football. Myself ... well I'm more of an individual sport type of person. Golf and racquetball are what I did the most (although I haven't done either recently). I'm also more of a work-outer (swimming, kickboxing, pilates, and running -- running is last on the list for a reason : ) I did have a volleyball team going for a few seasons though and found out I'm not too terrible at that. Jay and I even played on the same team for a bit and that went quite well too. So, what I'm getting at is she'll likely be playing something. Especially now. Girls' sports options have exploded since I was in school. It'll be interesting to see what she chooses to participate in. 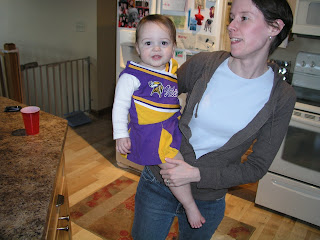 What might be even more interesting is to see which teams she becomes a fan of on the spectating side of sports. Living where we do and given the parents she has Grace is very much a border baby, exposed to the Vikings and Packers, the Twins and Brewers, Gophers and the Badgers, the Timberwolves and Bucks, the Wild and ... oh, well. Right now we are trying to give teams equal opportuntity as you can see in the photos. For those of you that know us, it will interest you to know that it was Jay's idea to buy the Brewers' T-shirt and my idea to buy the Vikings cheerleader outfit. Our luck, she'll decide to become a Bears fan.
Posted by Kate at 11:29 AM