This is a tale of two diapers.

Quick change
1:30 a.m. Awakened by a wimpering Gracie I made my way to her crib and started to unswaddle and change her. We have this handy blanket called the "Miracle Blanket" -- I kid you not -- that keeps her from flailing during the night. It's handy for that purpose, but not so handy when you'd like to make a smooth, uneventful diaper change. While I attempted to cut corners and just half unswaddle her during the change, she decided to do some extra tinkling after I removed her soiled diaper. Sure enough, her gown and a corner of her blanket were wet. We only have one of these miraculous blankets (at $30 a pop, we couldn't justify getting two) and hadn't discussed what the protocol should be when it became soiled. Since it was an outer corner that was damp I decided to swaddle her back up in it. During this entire process, Grace only screeched a little. Plus, I got her changed and reswaddled in record time and in dim lighting nonetheless. I almost woke Jay up to tell him about my accomplishment ... almost.

Holy crap! (literally : )
8 a.m. The fullest diaper I've ever seen. And from a smiling baby who didn't soil her clothes nonetheless! Think she was proud of what she produced.

I almost decided to make this a pictureless post because of the topic of discussion. But then I thought a cute post-diapering picture would make everyone happ 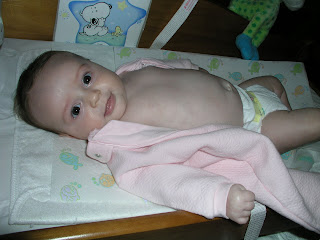 y. She's getting quite the belly now as you can see. Here's a content Gracie along with a picture of Snoopy and Woodstock. Those two deserve props for often keeping her in that oh-so-nice content state. Seems like Grace usually has a lot to discuss with them she's getting her diaper changed. Hope they're not critiquing my diapering technique ...

Kate- Been loving your late breaking news from the Edenborg household. The distance and hectic lives has kept us apart, but now with the EDITION I feel you are brought to my living room once a week. We get to watch Gracie grow up now, hey.. thought about your own reality tv show?