Many Faces of Grace 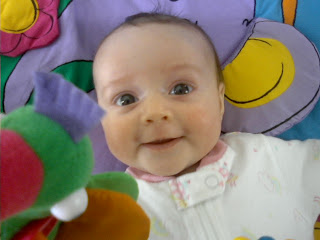 Our anniversary was this weekend and Grace gave us the gift of 7 hours of continous sleep on Friday night. We greatly appreciated the gesture. Since that night though it's been back to fragmented sleep, which is to be expected of an 8 week old, especially since we're messing with her slumber situation. Not only have we started putting her to bed earlier, we also took her out of a sleep positioner that she's been in since her first week home. Thus she's been a restless sleeper (is that an oxymoron?). So restless in fact that when I put her down for a nap she gave herself her first scratch on her pretty face. Poor little girl.

This photo shows a smiling Gracie -- something I didn't see much of this morning as she was super overtired and cranky. This afternoon the little grin came out though as she watched me make chili. (Maybe it was more a look of shock that I was cooking -- something she's never seen me do before.)
Posted by Kate at 8:42 AM