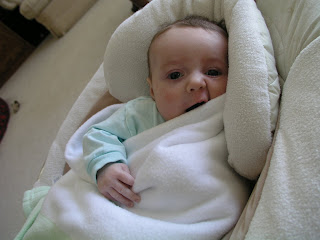 Grace is discovering her hands. She's grabbing a lot more which is fun to see and sometimes fun to feel. She's also starting to figure out that hands can be better than pacifiers since they're always accessible. Grace will also try to soothe herself by sucking on whatever is close to her mouth. Zippers, fingers, blankets (see photo), Jay's shirt -- she does not discriminate : ) This means that there are slobber spots everywhere, but better that than a fussy baby.

Speaking of fussiness, there's been a lot less of it. At least a lot less of unpredicatable fussiness. This is because I've pretty much figured out that a fussy cry likely means she wants to do one of the following:
* sleep (During the day I still need to encourage her to nap by swaddling, rocking and pacifing.)
* eat
* interact (She'll do this with one of many items: faces, mobiles, items hanging from the light above our kitchen table, playmat, her "ipod," lighting fixtures, ella, etc. She has recently noticed TV screens and we're making sure she doesn't "watch" for more than a second. She really wanted to watch American Idol last night though : )

Between 7 p.m. and 8 p.m. there's quite a regular fussfest. Or maybe she's just trying to harmonize with the American Idol contestants ...
Posted by Kate at 10:48 AM

Ah yes, the "fuss fest." My grandmother always lovingly referred to that hour of the day (usually right around the dinner hour/early evening) as "hell hour." Hang in there. She is darling! Molly