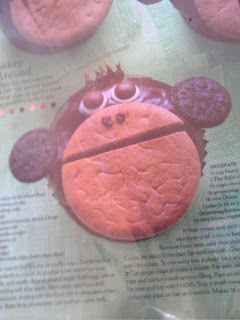 I don't like to cook, but I really do like to bake. So figuring out what kind of cake to do for Grace's birthday each year will be something I look forward to. Since Jay's on a diet this year, I thought it would be a smart idea to do cupcakes instead of a cake so that those who came to our birthday gathering could take the extra cupcakes home with them. It so happened that I saw some cutely decorated cupcakes in a magazine. They looked fun and easy so I showed the picture of them to Grace and she exclaimed "Monkeys!!!!" Yep, these were it.
The photo and recipe have been on my fridge for over a month but I never read over the ingredients or cupcake procedure that closely. I was in for an mini-adventure. (The use of this term will become clear shortly.) I added the cupcake ingredients to our weekly grocery list and headed to the store. Two products almost put a halt to my plan. It was all going smooth until I was trying to find mini-Oreos. I'd never looked for these before and assumed they'd be in the cookie aisle. I also assumed they'd be by the other Oreo products. I started to panic when they weren't were I thought they'd be. What else could I use? These cookies were the monkey ears, what other food would work? Then as I walked further down the aisle, away from other Oreos, I found them in a bag, right next to gingersnaps. How odd and how handy, all at once. I needed gingersnaps too. Phew. So now to the next mini-item. Mini-M&Ms. Here my assumption was that they'd be in the candy aisle. Being Valentine's weekend there were a plethora of bags of small packaged candies. I dug around and didn't find any that included mini-M&Ms. Ahghhhhhghhhh. Again I started thinking, what would be the same size as mini-M&Ms that I could use for eyes? The only thing that came to mind were those little red hot candies, but then all my monkeys would look possessed. I finally found an entire bag of little packages of mini-M&Ms that was tossed in the wrong bin. I grabbed 'em and thank goodness we had everything we needed. Lesson for Kate: Read the fine print in these magazine recipes. 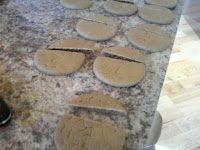 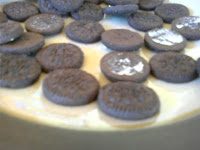 So the day before Grace's party I started the baking process. This was the easy part. Even making the homemade frosting worked well. Then the decorating. It was make or break time. The prep of the decorating implements was fun at first. I needed to "clean out" the filling of the mini-Oreos. Tasty. (Yes, I used a knife, not my tongue!) Then I read the directions to the next part: "Cut the gingersnaps." What do they mean by "cut"? The first few I took a knife to promptly shattered. Then I tried a few other things which resulted in treats for my pug assistant. Finally I used a knife to score the top of the cookie and then picked it up and snapped it. It broke right where it was supposed to. Another phew. After opening seven packs of mini-M&Ms to get the necessary 36 brown ones for the monkey eyes, I was ready for the cupcake assembly line to begin. 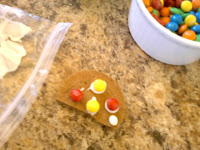 First the mouth, then the ears. Mouth, ears ... on all 18 cupcakes. Now the part that could be tricky. The eyes. The tube of frosting I had was too big and if I put an obnoxious amount on the cupcake it could ruin it. I did a few "test eyes" on the back of some of the shattered gingersnaps using the non-brown M&Ms. One turned out very well so I felt I was ready to move on to the real thing. I ended up having two test monkeys. With not enough white frosting they looked ... eyeless. But then I got the hang of it. 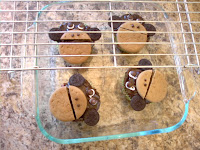 The last few steps. First, little bits of frosting for nostrils. Got it. Done. The last step, little tuffs of frosting hair on the monkey heads. I skipped this last step. I'd created some quite cute cupcakes and I had an inkling that this last touch could be the end of their cuteness. (I took this photo of some of them before I realized that a few were caged monkeys. Hee.  Notice that I have the magazine image placed way away from my cupcakes so there is not the opportunity for a direct comparison. Ha.)
Grace's birthday party day arrived and I was wondering if all the work was worth it. When I saw this little face consuming a monkey face, I had my answer. 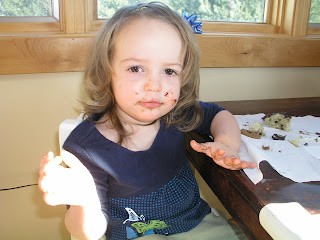 Is that Grace?! It has to be because she looks just like you, but she looks sooo grown up! I can't believe it! Cute cupcakes!!

Adorable monkey cupcakes - so impressed you made those - they are great! :)