Getting Right to the Point 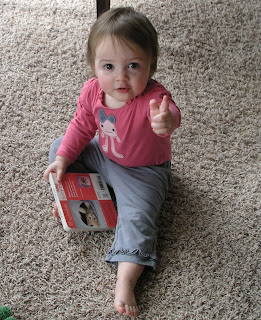 Sleeping: That crying-it-out weekend has had a huge payoff. We totally trust that Grace will get herself down to sleep. And if she doesn't, we know something is wrong (teething, sick or Bitsy Bear "escaped" from the crib).

Walking: This is the big one that everyone asks about. Grace still finds crawling to be the most efficent way of getting around. That said, she has taken a few steps on her own but not a full-out walk yet. Verrrrrry close.

Teething: A few weeks ago we realized that Grace had four molars coming in at once. She'd been a bit on edge, but was a real trooper. These teeth are still in process. Stubborn buggers.

Standing: She does stand for a short period of time unassisted, usually when she's somewhat distracted and playing with something (like her new cell phone).

Eating: Our girl is a great eater. She communicates well when it comes to how she feels about the food she's eating. "Numm, numm, numm, numm." And that's a direct quote. She is so the opposite of what Jay and I were like as kids from what we hear. When I gave her brussel sprouts for the first time I wanted a record of it. We videotaped it so we could tell Grace one day: "See, you used to like brussel sprouts!"

Watching TV: We watch a little bit of TV with Gracie, especially on Sunday mornings when some fun kid's shows are on. She likes watching and sometimes squeals a bit. Watching her makes watching Elmo tolerable.

Dancing: Our love for music has passed on to Gracie, and so have our dancing "skills." She does a little boogie when I put on some kid-friendly CDs. She also activates the many toys we have for her that are music based. On one toy she knows exactly which button to push to get songs to play. She often does a mix-master Gracie session and hippity hops a bit.

Flirting: Grace is a pro at this. I took her to a cafe recently and ended up being there for longer than we'd anticipated. I was worried that Grace would get ornery and bored. Instead she watched people and waved and smiled and played peek-a-boo, especially with the boys : )

Laughing: These range from giggles to hearty laughs. Grace's got some definite tickle spots which triggers some of the laughing. She also laughs when she realizes others are laughing and she wants to join in.

Talking: Grace sure can talk a lot, but what she is saying is still mostly a mystery to us. 'Da-da," "bye-bye" and "hi" are solid words she has a handle on, and sometimes "ball." But ma-ma is still pretty random.

Endearing: So this is not a true "-ing" is the sense the others are, but deserves an update nonetheless. Jay and I have our favorite things that Grace does -- often involving kissing and hugging. With Jay she does the goofiest, yet cutest kisses. As he comes in for a smootch she opens her mouth wide. (Jay said she better grow out of that habit : ) For me, my favorite thing is when Grace crawls over to me, pulls on my pants to pull her self up and stands up hugging my legs with her little face and big smile peering up at me. No words are needed.
Posted by Kate at 11:48 AM

Loved hearing about all her ings. What about expecting? Just for the record I'm all for Grace having a sibling!