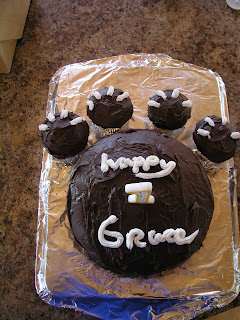 By the time most kids are one-year-old the parents have dealt with many sicknesses, but Grace has only had a few sniffly days and has been otherwise relatively healthy. We're thinking that we got a bit of a reprieve because we endured her stay at Children's Hospital when she was a few months old. But wouldn't you know it, the Saturday before her first birthday she woke with a fever. She wasn't herself, not especially crabby, just not as cheery. She was super sleepy and had very long naps -- something I would've cherished if she was healthy. Instead, I anxiously awaited her awakening so I could take her temperature. Given how I was taking her temperature, I don't think she was as anxious to have it taken. Or at least it was a different kind of anxious. The long naps gave me time to perfect her wonderful pawprint cake (with decoration by dad : )

We flipped through our baby books trying to recall what to do with an infant who has a fever. The resources all differed. One said to call the doctor when her temp was 102.6. Another said wait until it's 104 and a third said 103. Then I called the nurseline (a few times) to see what we should do. They were very helpful and eased my mind a bit.
We were thinking we had it handled for the night and were in the process of giving her some fever reducing medicine. Turns out that medicine was also vomit inducing, at least that was the case that evening. It induced, not once, not twice, but three times. And in rapid succession. Since that was the first we'd experienced projectile vomiting with Grace, we knew we should consider ourselves lucky. But we didn't feel so lucky that night -- especially since we were just about to eat dinner when the incident occured. A few hours later -- after clean up of the floor, feeding chair, clothes, baby, and pug -- Jay and I commented on how surreal that had been. I can only imagine what was going through Gracie's mind at the time. 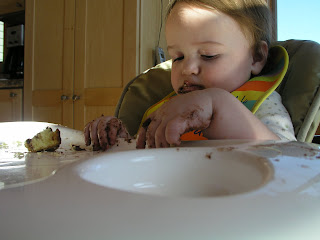 She woke the next morning and still had a temp, so we started making phone calls to cancel her birthday gathering. We had a low key day, just grandparents and a few other stopped by. Not to worry though -- as you can see she did the requisite cake smooshing. She was a bit more chipper than the day before, but didn't have the energy to celebrate fully.

As we went to bed that night we decided that if she still had a fever the next day -- her actual birthday -- I'd stay home from work take her to urgent care. When she awoke that Monday, lo and behold, no fever. I was so happy she was better ... but a small part of me was disappointed that I wouldn't be home to celebrate her birthday with her. I remembered the nine months she spent with me in my tummy. Followed by the 12 months we've shared as a family. I realized that I thought about and still think about her birthday every day -- and I always will.
Posted by Kate at 8:44 PM