Part of the reason we moved to Menomonie (other than Jay's great job offer, of course) is because we realized we wanted a simpler, less hectic lifestyle, We are very happy with our choice. That's not to say there haven't been some growing pains during the past month. One is the lack of Internet until now. Jay and I are both people who have become accustomed to checking online for many things: email, weather radar and most recently, Facebook updates. When we had to resort to dial-up for a few week or so I decided to postpone most online activities. To be honest, it wasn't that bad, especially when you have a 5-month-old to keep you busy : ) That said, I still did a little dance when we got reconnected.

I became aware of the second smalltown adjustment when I was in the checkout line at the grocery store. The lines are definitely shorter so I thought I'd be just zipping in and out. But then I noticed that the cashier got into conversations with everyone that went through. This was something that I hadn’t seen in years. Definitely not what we’d experienced at Cub or even Byerly’s in the Twin Cities. At first I could feel myself getting frustrated, thinking “C’mon, c’mon. Let’s go!” But then I remembered that I was really not in any hurry to get anywhere and calmed down. I didn’t even flinch when each person in line in front of me pulled out their checkbooks to pay for their groceries. Again, something we rarely saw in the metro. Now I’m used to, and even appreciate, the slower pace.

So now I know you’re probably itching to know what’s new with Gracie. Well, a few things. She’s gotten a taste of some food – the wonderfully tasty rice cereal mixed with breastmilk. Mmmmm. When I try feeding Grace, Ella gets so excited and begs for the cereal (she does love rice and cereal so it makes sense : ) So, I look at her and say, “Ella, you don’t want any of this, it’s yucky.” Then I turn to Grace and say, “Want some of this? It’s so yummy.” So I’m lying to one of my girls. Grace hasn’t really gotten the hang of the swallowing thing yet, especially when she’s distracted by Ella as you can see here: 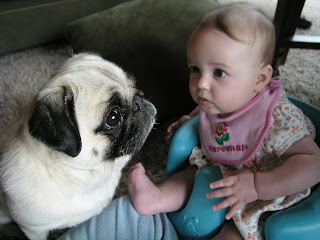 And now for some breaking news, Gracie’s first tooth is coming through. Tonight she wasn’t really interested in eating and so I put my finger on her lower gums and sure enough, a little bit of tooth was poking through. So far, she’s a teething trooper … but the night is still young.
Posted by Kate at 8:44 PM