We have one strong little girl. Strong in many ways. For one, she’s strong when it comes to pain tolerance, as she produced two teeth with ease, something that we really appreciate. That said she isn’t very attune to how to eat with them. When we sit down to have rice cereal meals, she sprays food all over her new feeding chair. Even with the mess, she looks like such a big girl sitting at the table with us.

Grace is also quite physically strong and uses her little fingers to pull hair and pinch the heck out of my arm. In fact, I had little baby finger-sized bruises on my a 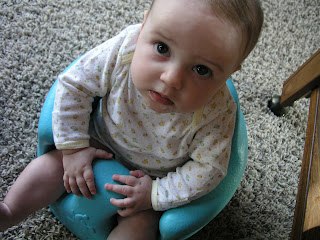 rm for a bit. It’s hard to believe the girl with this sweet little face can do that.

Then there’s the strong voice. She likes to do a shrieky sound a lot, especially if she’s encouraged to do so. (Jay’s not a big fan of this sound, but I’m guilty of cheering her on : ) The other week she decided to shriek through the grocery store … just because. A sound Jay’s a bigger fan of is Grace’s hearty laugh. She’ll do it if you tickle her or amuse her in just the right way. For awhile it was by grabbing her knee or tickling under her chin. Then it was when she played tug with a burp cloth and most recently it was when Jay tickled under her arms.

Grace will make both the shriek and laugh sounds when she watches her favorite pal: Ella. She really likes Ella a great deal and that makes Kate very happy. Ella still isn’t totally chummy with Grace, but will lick her every now and then. She will also appease Grace by sitting while she pets her. She always looks like she’s just tolerating the little tyke. Grace will win her over soon enough. Once those Cheerios begin flying they’ll be the best of friends.
Posted by Kate at 6:59 PM

From my experience doggies love the empty baby food jars too! They will soon be good buddies! What a cute girl!

Which seat did you end up picking for little Grace?