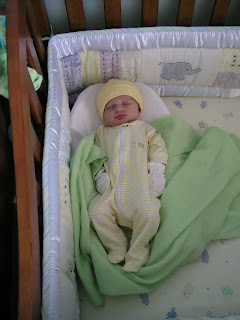 I've been dealing relatively well with the lack of sleep. This is partially because Gracie's been relatively good at letting me get shut-eye, sometimes even in three or four hours stretches. This weekend that changed and feedings were requested -- with a squawk -- every two (or fewer) hours. Since she'd been so generous with the hours of sleep for three weeks, this was literally a rude awakening. We're assuming she's going through a growth spurt that is making her super hungry and fussy. Hoping it's just a spurt and not a long term thing.

When I get up at 1 a.m., 3 a.m. and 5 a.m., I often stumble down the hallway and into her room a wee bit ornery. But when I look at that little face I usually am reminded that even though we believe she's the smartest 3-week-old in the world, she needs us to soothe her and give her what ever it is she needs, be that a feeding, cuddles, singing or any other type of soothing.

To counter the our frustration with the fussy, non-sleepiness, Gracie's been communicating in more subtle ways lately -- meaning something in between meltdown and sleeping. There's some cooing and babbling which is super cute.

I thought I'd share some of the things we tell Grace when she's screaming. The most common phrase that comes out of our mouths is "You're fine." Either that or we mock her cries. It sounds mean, but those who know Jay and I know that mocking eachother is something we do -- out of affection : ) When we do it to Grace, she gets this look on her face that seems to say, "Really?" Welcome to the family, Gracie.
Posted by Kate at 8:10 AM