So the story of the week is that Grace has grown too big for some of her sleepers. When we brought her home from the hospital everything seemed so big on her, so it's amazing to think that less than four weeks later she's already outgrown some of her clothes. We'll have to do some shopping this weekend : ) Her growth is also apparent in the diapers we use. She's right in between sizes right now which makes diaper blowouts more of a regular occurance that we'd like. The diapers that are a bit too small tend to come undone and allow "leaks" and those that are a bit too big just have too much space around the legs, again allowing for "leaks."

Since she keeps changing so much, we continue to take pictures of Gracie on a daily basis -- although we do realize you can only have so many pictures of her in her different apparatuses (swing, bouncy, Boppy, dad's lap, mom's lap). That said, when I placed her in the Boppy last week I couldn't resist snapping some photos. I captured this action shot of Grace: 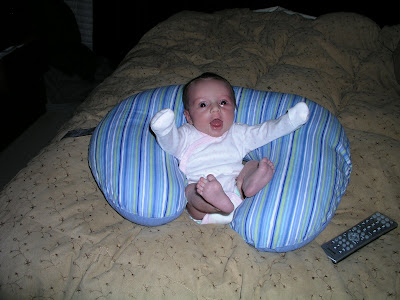 It's one of those photos that should be in a "Create a Caption" contest that explains what's going on in the photo, for example. Gracie asks "Alright you guys, what did you do with my hands? I had hands a second ago. Ooh, look ... feet." Feel free to post your own thoughts on what Grace might be thinking.

She looks like she's so much fun, Kate! I'm really sorry we didn't get a chance to meet her when we were up north a couple of weeks ago.

My mom suggested the following:

- My drive landed THIS FAR from the cup.