Ah, a nice calm week. No trips to the hosptial, no doctor appointments ... just chillin' with Gracie girl, hanging out around the house. (Although Jay might disagree on the calmness of the night he spent with Gracie this week -- perhaps he'll write about that later.) We've had some exciting moments watching Grace starting to react to her surroundings in ways that show she's thinking. She's also using her hands more purposefuly to grasp things. She's such a smarty, in addition to being alert and beautiful, of course. Those two adjectives -- alert and beautiful -- are the ones we hear most from other people. A few words about them: 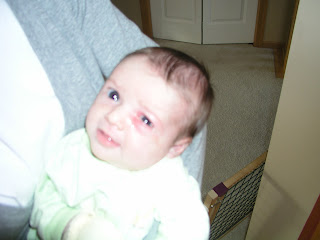 "She's such a beautiful girl!" = I've joked that perhaps Jay and I should be offended because this is often said with a hint of surprise, like, "Wow, how did those two create such an attractive baby?" Hee. Both of us were pretty cute babies and toddlers ourselves. That said, we may want to forewarn Grace about the early teens ... not the best time for Jay and I. (And no, we don't plan to post pictures to show you what we mean : )

She even looks cute in the photo above which shows how swollen her eye was the night we took her in to the hospital. 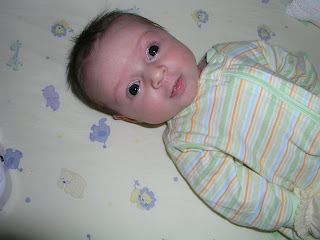 "She's so alert!" = Indeed she is. This little one fights sleep like nobody's business. It's like she's afraid she'll miss something. During the day she only gets maybe four or five hours of sleep. Ella and I are trying to teach Grace about the wonderfulness of naps. Thee dog even demonstrates them for her a number of times a day.
Posted by Kate at 11:42 AM