Apologies for leaving your question unanswered. I left you dedicated readers hanging -- anxious to find out what I think of Lost. Or maybe you we too busy thinking about what you think about ALL of the unanswered questions of Lost.

I want to commend those of you who've been dedicated watchers of the show. Wow. I would've gotten frustrated long ago. As I indicated in an earlier post I'm a newbie to the show.  That said, at this point, I feel like I know just about as much about what's really going as long-time viewers.

Jay and I watch the show on DVR so he's able to stop and explain bits of who certain people are or tell me what a certain place or object meant in previous seasons. We mess with each other every now and then saying "Ohhhh, I get it." Or "Ahhh, it all makes sense now."

I did have a proud moment when watching it one night. I figured out that Claire was Jack's sister on my own (before they reminded viewers of that this season). Small victories. 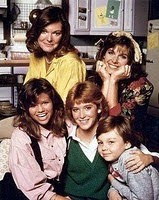 I have to say, it's interesting to see who shows up on the show -- such as the guy who played Chip on Kate and Allie, back in the day. He had a gun! Chip shouldn't have a gun. Where's his mom? Was his mom Kate or Allie? And was "Kate" Jane Curtain, or was she "Allie"? And what's the other mom's real name anyhow?

Who knew one show could instigate so many questions?
Posted by Kate at 7:50 AM

Oh my, I totally hadn't placed him, but you are right!