** I know I said I'd update this weekly, but visits to the ER, urgent care, a trip to Texas and the inability to avoid some deadlines, derailed me a bit. In order to make up for it I'm going to provide you with a three part story -- otherwise known as a trilogy. **

The Boot Trilogy
Part I: I have big calves. OK, disproportionate calves. I have size 6 feet and size more-than-6 calves. Not particularly a problem unless you want knee-high boots. I want knee-high boots, and have desired them for many, many years. Each winter (or late spring when lots of sales are tempting me), I try on at least three pairs of boots. Sometimes all at one store. Sometimes at many stores. Each year I'm disappointed. This has been going on for a number of
years. End of Part I.
Part II: I had not even intended to go shoe shopping, but I was waiting around in Kohl's while Jay was exchanging some items. Ah, a boot sale. Hmm, lets take a look. What's this? A pair of cool looking boots on sale for $45 (marked down 50%!). Let me try those on. So I plopped down. Unprepared for my endeavor I had on athletic socks and jeans. Not the best attire for trying on boots. But I gave it a try anyway. I slipped the first on to my right foot. Ziiiiiip. What?! It fits my foot and calf? Huh? What?! I was so excited I almost ran down to the exchange area one-booted to show Jay. First I wanted to try on the left one. So I slide my left foot in, and ziiiii ... hmm. Seems to be stuck mid-calf. Aha, there was a bit of string there that it must have been catching on -- tried it again ... ack! I took the boot off to test the zipper -- it slid up and down with ease. Ah, it's fixed. Back on my foot it goes. Here we go, slide the foot in and ziiiiii--iiii. Dang it!

Since this process had taken quite awhile Jay had returned and repurchased some items and came over to the shoe section to find me red-faced and frustrated. He was impressed I had a boot on (he was, in fact, the one who helped me label my disproportionate calves phenomenon). I explained my dilemma and asked for his assistance. He started to help with the zipper. OWWWW. Not gonna work. So close.

Part III: A week later I half-heartedly went to the mini-department store in my hometown "mall" with Grace. The reason I call it a quote-mall-unquote is because when I was growing up one of its two anchors was a grocery store, in the mix with a few clothing stores, shoe store, Hallmark, Radio Shack, Maurices (where I ended up getting most of my clothes as a teen), and the place where I got my ears pierced. Ah, a jewelry store too. It also had a supper club type restaurant if I remember right. I'm likely missing something ... anyways. So I went there to take a look at some things for Grace and Jay and just perused the boots. I st 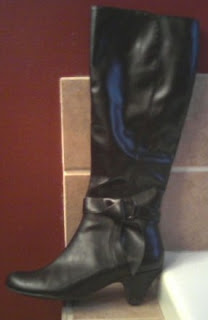 rolled around a bit before I decided to try some on. I tried on the first pair, which fit! But I didn't like the way they looked and wasn't about to buy something just because it fit. After a few passes around the store, I tried on some more. I had Grace with and she was doing really well for an almost 2 year old. But she was on the edge of antsiness by the time I tried on the fourth boot. She'd been wandering around the shoe section playing with the foot sizer, repositioning that handy shoe mirror and pulling shoes off the rack to try some on herself. Still she was being good enough to let me concentrate on the task at hand. That said, nothing fit right and/or looked weird. I went back to the first style I tried on -- this time in black, hmmm. Ok, these fit, and you know, I kinda like them. They have two zippers. One regular zipper and the second for extended sizing, for women with "athletic calves" -- heee. So that's what I have. How nice of them to put it that way. This adjustable sizing was perfect. Who knows what my calves will do during the next few years? It's not likely they'll get any smaller. These boots were mine.

At this point I've only worn the boots once and no one noticed, and why should they? Most people can wear boots without such a saga. The lack of hoopla over my new footwear is a fitting end to this trilogy. (Get it? Fitting end, because no boots fit me before, and now I have a pair that fits and it is the end of the story. See how that works? :)
Posted by Kate at 7:48 PM

Loved this post! I've told people about the mall where I spent my childhood and that it was anchored by a grocery store, and they don't believe me, now I have it in writing to prove it! The clothing store I remember from Menomonie was Lynne Rose. I remember thinking it was so fancy!

Too funny, Kate! Glad you found something you like AND that fits!