Even though Grace has moved past being on all fours for transportation purposes, she still is quite the doggy imitator and that started early on in her life. One of the first things she learned as a baby was a response to the question, "What does a doggy do?" Here's how it happened: I initially thought that I was going to teach Grace some baby signs to help her communicate and so we started reading her a book that showed her different ways to "say" common household objects -- one such object that was common in our house was the dog. The sign for dog was to stick out your tongue. I added panting noises for emphasis (and entertainment : ) Not too long after that Grace was making the association, and when asked what a doggy does, she'd pant. Never mind that Ella doesn't pant unless she's really in a hurry, such as when a Cheerio has dropped on the floor.

Grace also learned to pet Ella nicely pretty early on, a lesson she sometimes forgets when she gets excited and starts bopping the dog on the head. We have a very pa 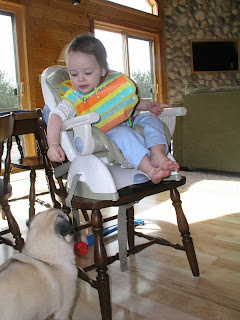 tient pug when it comes to Gracie. I think she recognizes Grace is great provider of nibbles and tidbits as you can see by the photo.

Oh, yes, I can't forget this. Our daughter fetches. We have always played a game of fetch with Ella where we toss a stuffed toy (named Mr. McFurry) down a hallway and Ella scampers and brings it back to us. Grace has loved to watch this and squeals with excitement as Ella trots past her as she retrieves the stuffed animal to me. After about five tosses or so, Ella tires of the game and Mr. McFurry is abandoned at the end of the hallway. At that point, Grace looks at me, looks at Mr. McFurry and then toddles down the hallway to bring the lonely toy back.

As you can tell, we think our daughter's probably the smartest toddler in the world. We were very proud when she pointed at the dogs on TV when we were watching the annual Westminster Dog Show this spring. She panted to demonstrate that she knew what they were. We were very impressed ... until she pointed and panted when we showed her the deer grazing in our front yard. Good thing this little doggy has time to learn some new tricks.