Gestures of All Kinds

I really enjoy taking Grace places and that's so the opposite of what I thought I'd say before she was born. Part of the reason is she's so dang sociable and chatty. So much so that it's hard for us to figure out when/if her first words have/had happened. Usually it's the parents that are trying to convince others that their kid's said his/her first word. But in our case, others have been trying to convince us. I finally got a library card at the Menomonie library and while I was filing out a form Grace looked at one of the librarians and made a "hi" sound. The librarian looked at me, and asked, "Did she just say hi to me?" I said, "Maybe." The librarian was convinced after Grace repeated the word a few more times and told me, "I'm going with it. She said hi." Then the next evening we had company and she seemingly said hi to our friends. They did a double-take and had the same reaction as the librarian, again convinced that Grace had just said hi.

Along with the "hi" is often a wave. She has two styles of waving right now. One is a graspy, grabby wave and the other is more of your homecoming queen-on-a-float wave. The first gesture that she learned though was from our nanny. The ever-popular "so big" with arms stretched over her head in a touchdown motion. She does it if we ask: "How big is Gracie?" (She also sometimes does it when I ask: "What do the Vikings never get?" Hee.)

My two proudest teachings so far are doggy related. Grace was initially grabby when it came to interactions with El 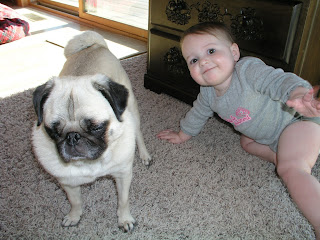 la, but I always would show her how to pet a dog nicely and I would say "nice pet" in a soft tone. So now Grace does smooth petting motions and says "Nice." Well not really. She says some sort of "word" in a soft tone though and it's super cute and an especially good lesson for her to have learned. Grace is quite the dog person already and loves to crawl after Ella. Poor pug who's used to napping 20 hours a day gets exhausted with all of this activity sometimes. The expressions on the faces of both of our girls in this photo really says it all. Gracie says: "C'mon, lets play!" Ella says: "Where's the off button on this kid!"

The other dog-related teaching occurred through me pointing at dogs in her books and pointing at Ella and saying "doggy" and then panting like a dog. Grace will now mimic that. Very cute, not very practical. Practicality can wait.
Posted by Kate at 2:06 PM

You have a couple of cute girls there! Is the Menomonie library still in the Mable Tainter building? I have a Mable Tainter stuffed doll I ran across the other day. The memories!

Just wanted to let you know Madison (my baby!) laoves looking at your blog with me because it always has pictures of "babies" or "puppies" her two favorite things in the world!