A disclaimer: I still realize that we are super lucky and have a great baby – and we are so fortunate that she’s as good as she is, especially when it comes to sleeping. That is why when she was difficult to get down last Thursday night, it took me off guard. This sleepless trend continued and intensified over the weekend, through Wednesday.

We started off with a fun "girls' night" (Jay was in Vegas). As you c 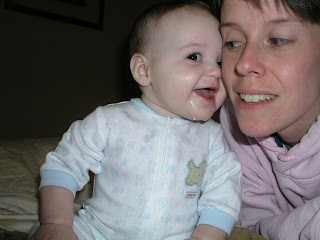 an see by the photo, Grace was fine during the day, but come bedtime – yipes! She’d be near sleep or fully sleeping as we placed her in the crib. But when her head hit the mattress those eyes flew open and the yowling began. Since she’s been so good, we hadn’t heard that type of cry since before we moved.

I realized that a number of things were going on in her little world and caused what I like to call (dum, dum, dum): The Perfect Storm.

Here’s thoughts that might have been going on in her cute little head:
* My daddy’s out of town.
* I’m eating a green food with a funny texture (green beans).
* Everything around me is sooooo fun to look at (pug) and grab for (pug).
* I fill my pants right after Mommy puts me in my crib (perhaps because of that weird green stuff she feeds me).
* My Grandma Patti is visiting me this weekend! She’s fun. She gave me a cow and sings to me.
* I’m went to a party (happy adoption day Dominic!) with two big dogs, four kids, one baby, many toys and many adults.
* I like my mommy and I kinda like to know where she is at all times. Mommy?

It’s a lot for even an almost 7-month-old to process! Given that Jay and I tend to be analyzers/overthinkers/obsessers, I wouldn’t be surprised if Grace had that trait too. Maybe she just had a lot going on in that little noggin and wouldn’t let herself go to sleepyland.

Then Sunday night I discovered another factor that contributed to (dum, dum, dum) The Perfect Storm: A tooth pushing through. Aha! She’d been fine when her first two came in, but apparently this one was different.

On Monday night, Jay was introduced to the bedtime struggle and we discussed when/if we’d try any cry-it-out options. We decided if the sleep struggles continued after this tooth came through, then we’d give them a chance. I warned Jay that I might need to leave the house. I don’t deal that well with Gracie’s yowling. Crying I can deal with. Howls that sound like “Mommy!” … not so much. This was obviously tooth pain, so we gave her some pain reliever and added a few things to the bedtime routine – a book and a fella we like to call G. Raffe. (He's been mentioned and pictured in previous posts.) We read/gnawed on a book. Then when we put her down, her giraffe stuffed animal accompanied her. After a bit of wimpering she grabs G. Raffe and drifts off to sleep. Whew.

Is that another tooth I see coming through? Good thing we can count on baby Tylenol, Oragel and Mr. G. Raffe to help us weather this storm.

A teething baby is never fun! But, I'll tell you what is fun is seeing a picture of you! Yeah!