Grace, being the mature four-month-old that she is, is so over the activities of youth (birth to yesterday : ) She's beyond just being held, changed and fed. She's moved on to bigger and better things, like bouncing, jumping and grabbing. Her bouncy seat is finally be used for it's intended purpose -- bouncing. And as for jumping, as you can see in the photos and video, she's a big fan of her Jumperoo. Then there's grabbing. Purple elephants, cardboard pictures of Snoopy and Mom's clothes are all common targets. She also likes to grab her own clothes, especially when Mom is trying to get her dressed. 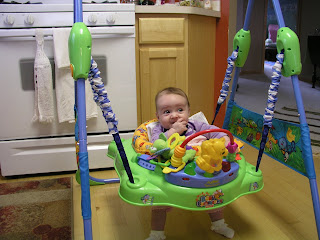 Seriously though, she's matured quite a bit. For example, she's a better napper and quite a good little traveler. This weekend Grace and I went to Menomonie to interview some nanny candidates and then on to Eau Claire for cousin Brady's graduation party. She was super good. Just a bit of fussing now and then, but overall she made a great impression on everyone. She marketed herself well to the prospective nannies and grinned at her cousin. (Since he's going to Madison on a golf scholarship, we're hoping he can teach Gracie that skill so she'll have college paid for too. We're thinking ahead ....)

Hold on a minute, I'll be right back. Bedtime has turned into awaketime.
Correction: It's wide awaketime ... I'll finish this post tomorrow.

And I'm back (the next morning).
Good thing this post was about maturity. After two attempts at putting Gracie to bed in her Miracle Blanket we realized that it had finally lost its usefulness. Within minutes of putting her down, her leg started to emerge and that was the precursor to escape of the arm. So we decided to give a new sleeping implement a try: the sleepsack. Since it's basically a blanket that zips up, the sleepsack allows her a lot more freedom (i.e. access to her arms). We thought we were in for a long night. While she did wake up three times throughout the night, she also fell back to sleep before I even had a chance to turn on the video monitor.

Our little girl's growing up : )

Keep up the good work.